Last chapter recap: Gifts get sent back to home sects and Kong Hou goes to spend a night in a treehouse.

This chapter has been brought to you by me, and Adnana.

“It’s not very like me.” Huan Zhong answered confidently after examining it for a while.

“The eyes.” Kong Hou pointed at the eyes of the roly-poly. “This place here flicks upwards just like your eyes.”

“All right, if you say so.” Kong Hou saw that Huan Zhong was unwilling to accept the truth and put down the roly-poly. “I’m going to change; do not come up here.” Finishing, she closed the door and window, and added a boundary.

“Cough.” Huan Zhong coughed and uneasily turned around. Seeing Lin Hu crouched over the ground and sweeping snow, he asked, “Lin Hu, what are you doing?”

“Master, I want to see if there are any more spirit grasses here,” Lin Hu replied with a stiff face, his hands moving as he dug a deep hole in a flash.

Huan Zhong shook his head. “Don’t dig; there will not be so many spirit grasses growing in the same place.”

Lin Hu said seriously, “Master, even if there is only one thread of hope, I do not want to give up.”

Huan Zhong was so good-looking, she would not be the one taken advantage of in any case.

The treehouse was refined, with a door, windows, food, toys, and furniture. Jade bells hung down the eaves and would chime musically when the wind blew. This fulfilled Kong Hou’s every fantasy about a treehouse.

It was so beautiful it was like a dream. Kong Hou felt extremely happy, as though her heart would fly out of her chest. Leaning against the window, she smiled at Huan Zhong down by the tree. “Thank you.”

“I’ve not touched anything inside; you can use it.” Huan Zhong jumped and softly sat down on the tree trunk next to the treehouse. He leaned against the tree trunk. Snowflakes passed between the leafless branches and fell on his head.

He coughed gently. He took out a small medicine bottle from his storage ring and swallowed the entire bottle. Turning his head, he saw Kong Hou looking at him with wide eyes. He put away the medicine bottle. “What is it?”

Kong Hou shook her head. Extending her hand, she opened a folded umbrella. She flicked her fingers, and the paper umbrella flew above Huan Zhong to shelter him from the cold snow. “The snow will be cold when it melts.” He ate so much medicine every day and could not easily use spirit energy. This kind of life would be very painful.

The paper umbrella blocked the wind and snow. Huan Zhong reached out to grip the umbrella handle and felt the cool sensation on his palm. “Thank you.”

The jade bells chimed. Kong Hou looked unblinkingly at the side of Huan Zhong’s face. She had never known that a man could be so good-looking when gripping an umbrella. Such a good-looking man was the gift of the heavens to the world, to give everyone enjoyment.

Suddenly, Huan Zhong folded up the umbrella and looked into the sky.

“What is it?” Kong Hou saw Huan Zhong do this and looked into the sky. Other than the snowflakes illuminated by the candle light of the treehouse, she did not see anything else.

“Cultivators are coming.” Huan Zhong flew to the door of the treehouse, lifted his robes and sat down cross-legged. He said without turning his head, “The treehouse has defensive formations. If cultivators enter the forest later, do not come out.”

After he said this this, the treehouse door behind him was pushed open. A force coiled around his waist. He maintained his cross-legged posture as he was forcibly dragged backward in an inelegant manner.

“Shh.” Kong Hou waved her sleeve and sealed the jade bells to stop them from making sound. She then extinguished the candles in the treehouse. Seeing Lin Hu put away the carriage and hide in a tree, she closed the window and said in a small voice to Huan Zhong, “Do not talk. Maybe they are just passing by.”

Huan Zhong stood up and adjusted his clothing. Although he was in the dark, with his cultivation, he could clearly see Kong Hou’s actions. At this moment, she pressed carefully to the door and looked through the crack like a timid puppy.

“Do not be afraid. The cultivation of the incomer is not high.” He blurted out the words in his mind. “I can protect you.”

Kong Hou straightened and looked towards Huan Zhong. But the treehouse was too dark and she could not see where Huan Zhong was, or his expression. “When travelling outside, peace is best. If one does not have to fight, then do not. Safety first.” Also, with Huan Zhong’s present condition, she would not dare have him fight.

When she thought of this, she put her hands together and murmured mentally, please do not be evil cultivators or unreasonable nomad cultivators. The best would be for those strangers to be passing by and not notice them.

Huan Zhong looked at the young girl praying and could not help but think, did she know that cultivators with Mind Manifestation cultivation and above could see in the dark? Huan Zhong moved his gaze away and decided to not let Kong Hou know of such an awkward thing.

Girls of this age thought greatly of their face?

“Master, we have flown for two days and nights. Should we rest for a while?” The blue-robed disciple wiped the frost and snow off his face. When he spoke, a huff of warm air came out.

Spirit Master Shui Guan looked back at his tired-looking disciples. He nodded, “There is a forest below. We will rest there and start travelling again tomorrow.”

The disciples were overjoyed and hurriedly drove their flying talismans down to the forest. The blue-robed disciple followed Spirit Master Shui Guan and said in a small voice, “Master, this is just the Mind Manifestation ceremony for a peak master of Primary Luck Sect. Why are we in such a hurry?”

Spirit Master Shui Guan jumped off his flying sword and said with a sigh, “Our Dragon Tiger Sect is weak. Even if we want to become a subordinate sect of the ten major sects, they will not accept us. Primary Luck Sect has developed greatly over the last century. People say that Primary Luck Sect will likely replace one of the ten major sects and become a new member. We cannot afford to offend them.”

“Primary Luck Sect accepted two single spirit base disciples last year. Supposedly, they are extremely talented and rival pentad spirit base disciples.” Spirit Master Shui Guan took out a Wind Preventing Lamp from his storage bag and reminded the other disciples, “Do not get lost. Guard against beasts in the forest.”

“Yes.” The disciples closely followed Spirit Master Shui Guan. The blue-robed disciple said discontentedly, “If we can be under Radiance Sect like Sky Sect and Harmonious Wind Study, we will not have to curry favor with sects like Primary Luck Sect.”

In all of Lingyou World, there were not more than ten cultivators with Mind Dividing cultivation. From this, Radiance Sect’s strength could be seen.

The deeper they walked in, the more Spirit Master Shui Guan felt something was wrong. He stopped and bowed towards the surroundings. “This one is Shui Guan of Dragon Tiger Sect, passing through this place with disciples of my sect. This one did not intend to disturb Path Friend’s rest. Please forgive me.”

The disciples saw Spirit Master Shui Guan react like this, and gripped their talismans. They looked around in panic but could not find any other cultivators.

Footsteps sounded in the forest and a blurry figure appeared behind a tree. Spirit Master Shui Guan took a deep breath and put his disciples behind him.

Shui Guan finally saw the other’s appearance. A high nose, a wide face, thin lips—this person did not appear friendly. His black robe seemed ordinary but was filled with spirit energy. More importantly, the other had higher cultivation than him and should be a Mind Manifestation forebear.

“Greetings, Forebear. Apologies for disturbing Forebear. This one will leave immediately with my disciples.” Spirit Master Shui Guan was extremely perceptive. He did not dare to gamble with the lives of his disciples and himself on this forebear’s temper.

“No need. This one is just staying here temporarily with this one’s master and will leave tomorrow morning.” Lin Hu saw the group’s tired expressions and guessed they had travelled a long way. “Everyone, please rest here.”

“Many thanks, Forebear.” Spirit Master Shui Guan sighed in relief and bowed in thanks to Lin Hu. He did not know what kind of able person this Mind Manifestation Forebear’s master was that a Mind Manifestation forebear would be his servant.

Lin Hu ignored them and hid back in the trees.

“So they really are cultivators passing by.” Kong Hou relaxed. “Huan Zhong, you are so strong to have detected cultivators coming from so far away.”

Huan Zhong grimaced. Right now, he could not even detect the cultivation of other nearby cultivators. How was he strong?

“Originally, I was slightly afraid travelling by myself. Now that you are travelling with me, I don’t have any fear at all.” Kong Hou ignited the candles in the treehouse and released the seals on the jade bells. The chimes sounded again.

The light reflected on Huan Zhong’s flushed cheeks. He stood up and said, “I am going to the outer room. Call me if there is anything.”

Huan Zhong paused in his steps. As he turned back to look at Kong Hou, his lips curved slightly. “You as well.”

A wooden house suddenly appeared on the tree and gave Spirit Master Shui Guan a fright. Just now, he hadn’t detected the existence of the house at all. Someone had put a concealment boundary around the house.

“Master, would the Mind Manifestation Forebear the master mentioned be living in this treehouse?” the blue-robed disciple said in a small voice. “This seems to be a first-class talisman.”

“Do not speak.” Spirit Master Shui Guan stopped his student from saying something inappropriate. “Rest early. Tomorrow, we will go see them to say farewell.”

The night was light. Huan Zhong sat under the eaves of the tree house, the wind blowing on his face. He took out the jade medicine box from his storage ring and caressed the patterns on the box. He reached out and sealed the noisy jade bells.

The jade bells were beautiful, but they chimed constantly, disturbing people’s dreams.

“Master.” Lin Hu jumped onto the tree branch and said to Huan Zhong through a sound art, “You should rest.”

Huan Zhong turned to look at him. “Lin Hu, do you think that I am taking advantage of a young girl?”

Lin Hu asked with a stiff expression, “Master, do you want to hear the truth or a lie?”

Translator Ramblings: Paper umbrellas are beautiful but the ones that come to mind first are those cocktail umbrellas. 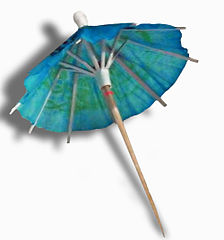 20 thoughts on “Ascending, Do Not Disturb Chapter 33 “Forest””