Most of the people present did not know what was happening. They could not understand why the distant mountain range would suddenly grow clear.

But Duan Zhiqiu and the bald official from the Divinity Bureau understood what was happening.

This was Mountain Moving Realm!

Amidst the fear, Xue Wangxu gripped the small white jade sword beside him with satisfaction.

The invisible mountain above everyone’s heads suddenly disappeared but a great power came from that ornamental small white jade sword which rose up from the ground.

Duan Zhiqiu let out a low shout. Dust shook off his metal armor, and he floated up-his body meters from the ground.

All the war chariots that were parked around seemed to have sensed a fatal danger, exuding dire vibrations. The taotie seals on the carriage dazzled with radiance.

The avaricious and bloodthirsty monsters were on high alert as though they would charge out of the surface of the carriage in a split second and slaughter people.

What was more astounding was, in the very next moment, these armored sealed chariots that were drawn by four horses, were propelled into the air by a surging power. They soared higher and quickly over the pavilions along the paths.

This was a scene hard to describe.

The armored chariots were flying in the air, the vicious monsters on the them snarling, but unable to fight.

Even the armoured Gate Guard soldiers were struck dumb. But the shell shocked Divinity Bureau official suddenly reacted and said, “No!”

The seal chariots were hard to make, each of them a result of the great labor by craftsmen and a valuable asset to the Qin Dynasty. According to the laws of the Qin Dynasty, cultivators that deliberately damaged the chariots would be immediately executed.

But his worry seemed to be unfounded.

With a woosh, all the abnormalities in the air suddenly vanished.

The armored chariots all, noiselessly landed on the ground, supported by a gentle force.

The snarling monsters on the chariots quickly disappeared as if in terror.

Only now did everyone realize that the White Goat Cave carriage which had been behind Duan Zhiqiu, now stood on the path behind Xue Wangxu.

Xue Wangxu looked at Duan Zhiqiu who was still trembling and shook his head. He was uninterested in saying another word.

He floated up like a weightless cloud back onto the carriage. He sat down next to the driver and nonchalantly said, “Return to the mountain.”

The mountains in the distance were faint. No one else dared to stop the carriage.

In an ordinary little courtyard, in the eastern part of Changling, was that cultivator with old eyes, who had once lamented over “an accomplishment was built on ten thousand lives”, sitting on a bamboo chair under a wintersweet tree.

At this moment, he did not wear a mask.

His face was as smooth as his forehead, but his beard had tinge of white, adding more signs of age to his face.

A powerful eagle, with slightly sparse feathers, glided and perched on his outstretched arm. He retrieved a rolled parchment from the hollow tube tied to the eagle’s leg. The moment he read its contents, he let out a deep sigh. He closed his worried eyes, and leaned back against the cold bamboo chair

Many scenes flashed through his mind.

Among them, were the corpse of the headless seal master that had fallen in the alleyway, Wang Taixu who had flown into the sky and disappeared, a fat chef who had drank poison and died in a small restaurant, and that invisible mountain which had landed on the distant highway.

Of all the battles he had faced, this seemed to be one with the greatest chance of success.

But who would have known, the typically potent and prudent expert, adept in seal and sword, would fall by the hands of a youth?

Who would have known, many people were willingly give up life than give up Wang Taixu?

Who would have known the unaccomplished sect master of a little ordinary and mediocre sect, whom most of the people in Changling had forgotten, was a master with Mountain Moving Realm cultivation?

A youth, who had not even cultivated for a month, possessed such combat power.

An ordinary Changling gangster had so many faithful men by his side. An old Mountain Moving Realm had even come out of the mountain this time …

So, he had not lost this battle due to bad luck.

If he had lost the battles in the past, perhaps there was a chance of overturning the situation. However, the defeat this time set everything in stone.

The difference between the number of cultivators in the world and ordinary martial fighters was a great one, but Changling always had many cultivators. But while realm five and below cultivators were easy to find, realm six was the line of demarcation.

So when Xue Wangxu displayed realm seven strength, there was little difference between three days and one days.

This worn old cultivator, wreathed in misery, closed his eyes for the final time. His vital energy went through his body like a storm and destroyed his vitality.

Blood oozed from his mouth and making its way to the clothing by his chest, like multiple roses.

The carriage carrying the quartet struggled up the mountain paths.

Wang Taixu straightened in the cabin and faced Xue Wangxu who had his back to the carriage door. He bowed solemnly, “Thank you, Cave Master Xue, for saving me.”

“If you need to thank, do not thank me.” Xue Wangxu looked at Ding Ning appreciatively.

Ding Ning too looked appreciatively at him.

At Wang Taixu’s words of gratitude, Xue Wangxu pointed at Ding Ning. “Thank him and your subordinate who saved him. If he had not mastered Profound Understanding in half a day, and did something that made me proud last night, I would not have left the mountain today.”

Wang Taixu said respectfully, “It is all the same.”

“The streets have quite a many people who are true. There is more honor among the commoners than those at court.” Xue Wangxu looked solemnly at Wang Taixu and slowly said , “But I still want to advise you to have some mercy and measure. The personages in court will give you an explanation for the deaths of your brothers last night. But if your subsequent actions cannot satisfy them, and pull some people who should not be pulled in, you and more of your people will fall.”

“You are very good.” Xue Wangxu’s gaze focused on Ding Ning again. Although he looked satisfied, he still couldn’t help but say, “I am very satisfied.”

Ding Ning wore a respectful and serene smile. “I am also very satisfied with you.”

Xue Wangxu smiled slightly and said, “My satisfaction with you is not purely due to your cultivation advancement, but how you interact with these gangsters. I like cultivators who have emotions, and not those who cut themselves off from all feelings in order to advance their cultivation.”

Ding Ning looked at him and said, “I am satisfied with you not because you are very strong … because I thought that Sect Uncle Li Daoji would get involved, and hadn’t expected you to come in person.”

Xue Wangxu did not disguise his satisfaction as he gazed at Ding Ning. He said, “Your wounds are major. But there are not many days until the sword trial festival of Green Vine Sword School.”

Ding Ning nodded. “So you have to give me some good medicine … otherwise, I will not last until the end, and get that spirit vein.”

Xue Wangxu laughed loudly, and the laughter echoed in the forest.

“You and my senior sect brother have some history. You can stay in White Goat Cave for a few days,” he looked at Wang Taixu and said coolly.

The sunlight cast a golden sheen over the carriage.

Ding Ning narrowed his eyes. He leaned back against the cushions and softly asked Wang Taixu, “Do you sometimes feel that all this ‘you killing others’, ‘others killing you’, will be very boring?”

Wang Taixu nodded. “Very boring … but people have a scale in their hearts. If the scale is not balanced, people will not feel good.”

Translator Ramblings: In previous chapters, there were carriages which are simple boxes with a step for a driver at the front. The Qin war chariots are completely different. 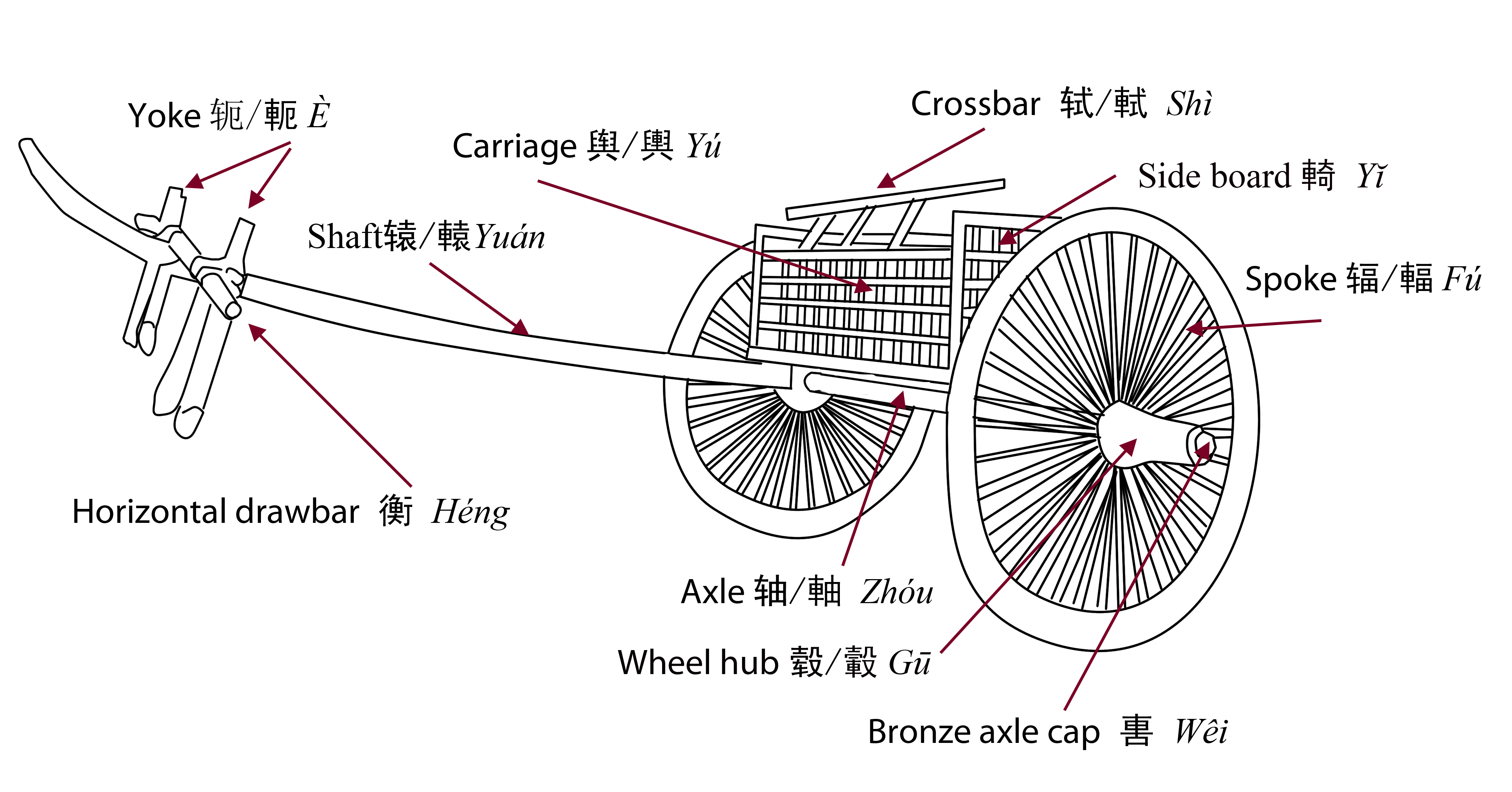