“A sword is forged, a thousand chariots cannot be hindered, escaping and changing identity, living in the mountains …”

The white figure travelled dozens of meters along the alley in an instant. As he sang, there was a sword light that danced like water. The Changling guards chasing along the way weren’t able to resist at all. They were sent flying on contact, crashing into the buildings around.

Hearing this kind of song, seeing that kind of invincible sword light, Qin Xuan uncontrollably trembled. He didn’t even have the courage or the thought pull his sword out of the yellow bamboo. He could only shout mentally, Bai Shanshui! It is Bai Shanshui!

That carriage driver randomly grabbed an empty carriage. One hand held the sword, another steered the carriage. He followed the white figure. In a few breaths, he passed by Qin Xuan and travelled through the long alley.

A roar of chariots sounded not far away.

Dozens of Tiger-Wolf Army’s seal chariots charged out of the flat and straight streets and tried to surround this carriage charging out of Changling.

“Country defeated, the mountains grieve, the subjects are responsible. We are lowly, we will not spare ourselves. Today, we fight Changling, tomorrow, we kill the Qin King, a sacrifice to our country’s soul!”

This song of rebellion with indescribable pride, sounded constantly. The seal chariots that continued to charge could not withstand even one blow.

The chariots of thirty thousand catties swung out on both sides, like the loads that a farmer carried with a carrying pole. They smashed into the buildings on both sides.

The white figure surrounded by a flowing sword light seemed to be invincible. Like a monstrous beast, the figure passed through Changling and headed for the shores of the Wei River.

Reinforcements were unable to arrive in time. The Divinity Bureau officials had just managed to reach the Jiujiang Commandery Meeting Hall. The bureau chief of Divinity Bureau, Qi Beihuai, immediately saw the Changling Guard commandant sitting dispiritedly on the ground. Then he saw the pillars of smoke rising in the air like dragons in the distance. Hearing the shouts of shock and anger from the streets, and the unstoppable song, he immediately grasped what had transpired.

The Changling guard commandant on the ground heard Qi Beihuai’s shout and struggled to lift his head. Blood dripped from the corners of his mouth.

Yet, he did not answer Qi Beihuai’s question. All he did was murmur repeatedly. “Bai Shanshui, why is Bai Shanshui here?!”

Here in the streets of Changling, Bai Shanshui slaughtered his path to the Wei River; there in the sword trial valley He Zhaoxi and Ding Ning’s battle continued.

Ding Ning slowly stood up from the ground covered with fallen leaves. Blood trickled from his mouth, but he still slowly raised his Last Flower remnant sword.

“Still not accepting defeat? Will you only give up if you wound yourself so seriously that you would be unable to cultivate in the next few months?” Xie Changsheng was enraged when he saw this scene. “What is he raising his sword for? Does he believe that this broken sword will help him win?”

He Zhaoxi had the same thoughts too.

He looked at Ding Ning and couldn’t resist saying softly. “You still want to fight?”

At the side, Nangong Caishu could not control her emotions. She wanted to stop Ding Ning from fighting. But Ding Ning seemed to have sensed her emotions. He turned to look at her and then shook his head.

He looked at He Zhaoxi. “I am familiar with your sword moves now. So I only need this next strike.”

One strike to determine victory?

Did he still have the confidence to win?

He Zhaoxi’s brow unconsciously furrowed, he felt that Ding Ning did not seem to be lying. Therefore, he prepared to use the most reliable method to fend Ding Ning’s next strike.

“People are valued for their self-awareness. If one isn’t self-aware, they will lose in an ugly manner,” Gu Xichun said, nonchalantly, at this time.

He was immensely pleased. He had felt even better when Xie Changsheng and the others who had been at odds with him couldn’t help but rebuke Ding Ning as well.

No one responded to him for Ding Ning, right at this moment, had started to move.

At the perimeter of the viewing platform, Xue Wangxu, who was sitting with half-lidded eyes on a vine chair, murmured to himself. “What are you really thinking?” As he spoke, he rested his hands on his knees. When he saw He Zhaoxi and Ding Ning at this moment, he had an inexplicable feeling, something was happening. His white beard was sparse, and if he pulled anymore, it would look ugly.

He Zhaoxi’s visage was stern. He also started to walk. He made a beeline towards Ding Ning and quickly swung with the yellow longsword in his hand which twisted horizontally in the air to form a curve.

This was a pure battle of force. The area swept by the horizontal sword covered all the places that Ding Ning could dodge to. Ding Ning had to fend off this blow.

This was the most reliable method — forcing the battle into simplicity.

The majority on the viewing platform thought that Ding Ning could not block this blow when it appeared. Ding Ning had been effectively thrown back by the previous attacks and unable to parry.

Ding Ning was still forced to swing his sword to defend like before, but unexpectedly, this time, things were different.

As he swung the remnant sword in his right hand and countless white flowers bloomed, his left hand crushed a piece of wax. A yellow pill the size of an eye was thrown towards his mouth. He gulped in one go.

For the first time, He Zhaoxi had an odd feeling.

This moment was too fast. His feeling of oddity was not evoked from this pill medicine but Ding Ning’s blow.

Ding Ning’s movements didn’t appear any different from the previous few times, but Ding Ning’s charge seemed greater as though he was going to collide with the sword.

He was left with no time to think.

He felt a wave of shock.

Ding Ning’s figure seemed to have been lifted by his force, and grew closer to him!

At this time, he seemed to hear a wild burst of medicinal power spread through Ding Ning’s body.

Ding Ning gave a muffled grunt as his body emanated a violent power. The vibrating remnant sword in his hand discharged more white flowers as it cut towards He Zhaoxi’s waist.

He Zhaoxi’s pupils contracted, and his breathing almost halted. He pulled back his sword. But his sword was very long. In this kind of close combat, his long sword was not as nimble as other’s short sword. In this moment, he only had time to use its hilt to fend against Ding Ning’s blade.

The fierce slash suddenly became a rich plain of green grass. The sword twisted sleekly in the air, leaving behind afterimages. It slid against the straight sword hilt and sliced at He Zhaoxi’s fingers.

He Zhaoxi’s mind was filled with disbelief but he had no choice. He loosened his fingers and dodged.

The yellow longsword started to make its way downwards after losing its master’s grip.

Looking at the yellow sword that landed far into the forest, and the inky green remnant sword blooming with white flowers, He Zhaoxi immediately stopped. His eyes flashed with more shock .”Pill Sword Path?”

A wave of yellow medicinal energy was still rolling underneath Ding Ning’s skin. Holding the remnant sword, although his clothes were disheveled, he looked more powerful and stronger than any time before!

Ding Ning could see that He Zhaoxi did not want to fight so he did not give chase. He nodded towards He Zhaoxi and softly said, “Nangong Caishu gave me this pill medicine before the sword trial.”

“I have not specifically cultivated the pill sword path, but someone has given me this pill. I will protect her with my life.”

“Ding Ning, you are a worthy friend. You are a true genius, as expected.” He Zhaoxi’s eyes showed bitterness and discontent but his face was full of respect. He bowed slightly to Ding Ning and said, “I have lost.”

The change in this instance was so quick and so refined that even she had only just managed to react.

“He Zhaoxi is defeated?!”

As she spoke in shock, the viewing platform was in an uproar, resounding with the loudest shouts since the sword trial festival began.

Di Qingmei’s visage was darker than the underside of a wok.

Gu Xichun’s disdain froze on his face, and did not dissipate for a long time.

“What pill medicine is this to have such powerful medicinal power?” Xue Wangxu did not pull off his beard, but his hands had almost torn apart his robe.

Complicated emotions danced in his eyes … Ding Ning was a great surprise. When the pill medicine had entered his mouth, he appeared like a swordsman who had cultivated the pill sword path. His timing was perfect, and even his maneuvers were better than He Zhaoxi. Ding Ning had appeared to be just surviving the fight previously because he had been trying to learn He Zhaoxi’s moves, while thinking of a solution.

If people were skeptical Ding Ning’s talent in the past, starting from this fight, everyone would realize that Ding Ning was an astounding talent and in several areas.

However, the better the talent, the less it should be squandered. He worried that this unknown pill, with such great power, would bring Ding Ning many harmful consequences.

“So worthy of admiration.” He only refocused when Xu Heshan beside him spoke.

“Thank you.” Xie Changsheng was slightly ashamed but also thanked Gu Xichun next to him sincerely.

Gu Xichun looked at him in shock, not knowing what he was being thanked for.

“Every time you’ve declared how he cannot do something, his performance has been astonishing. So, I thank you,” Xie Changsheng looked at him and explained. “After this, you should talk more about how he would fail.”

“Do not make trouble! So immature!” Xie Rou shouted harshly. She appeared as though she wanted to slap Xie Changsheng but her brows showed joy.

“It is not time to celebrate.” At this time, Xu Heshan’s grave voice sounded. “Su Qin.”

Xie Changsheng suddenly looked down and his expression changed.

Translator Ramblings: A carrying pole is one of those things that looks so uncomfortable but seems very useful. I mean, I wouldn’t mind one to help carry my shopping. 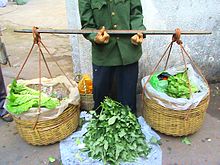