Chapter 75: Time to Brave the Winds and Billows

As Nangong Caishu broke out into a happy laugh, the viewing platform was finally relieved of shock. Few had expected He Zhaoxi, the strongest of Green Vine Sword School, on this day, would face defeat. And the one to bring this about was none else but Ding Ning.

However, for the people of Changling, the shocks of today were destined to be stronger.

Several soldiers and chariots charged along the straight, leveled streets at their top speed to block the path of the oncoming carriage.

But that carriage only made a quick beeline and bolted towards the Wei River.

Snippets of the rebellious song spread through the streets. As the seal chariots and heavily armed soldiers were unable to set up a blockade, nothing could stop that carriage and that white figure surrounded by water.

The heavy seal chariots were shoved into the buildings and shops on the sides by enormous waves created by the white figure. The charging fearless heavy armored soldiers were slashed like rice in autumn.

The Changling people in the distance, who did not know what was happening, could only see smoke rising from either side of the path of the chariot. It looked as though a serpent had made its way into the city and was returning at its fastest.

Near a turret, a Tiger-Wolf commander’s face was cloudy enough to drip water. “Issue the order, do not send any more Tiger-Wolf soldiers along the way!” he bellowed.

At this, a vice commander next to him couldn’t help but tremble. He knew that more Tiger-Wolf soldiers would just increase fatalities in this situation where the major cultivators of Changling could not arrive in time, and the Tiger-Wolf army could not set up a blockade. But he also knew, letting a great rebel kill their way out of Changling was a slap to the face of all nobility in the Qin Dynasty. Even if adding more men could not stop this person from reaching the Wei River, the commander giving the order to stop the soldiers from advancing only meant that after this matter he had to endure the wrath of the nobility.

“What are you dawdling for!” Looking at his vice commander who had yet to carry out the order, the Tiger-Wolf commander, face darkened, roared again. “If someone has to endure the fire for today’s events, it will not be us. Also, for me, the lives of my subordinates are more important than face!”

“If we cannot stop Bai Shanshui, you know what kind of consequences there will be from Bai Shanshui charging straight out of Changling. That carriage driver is one of the direct disciples of Cloud Water Palace, Fan Zhuo. Our Direct disciple has followed him for many months to gain more clues from him, especially to find Bai Shanshui’s location. Before we found him, we had to rely on the efforts of Bureau Chief Ye, and the marquises.” Mo Qinggong had arrived at the street of the Jiujiang Commandery Meeting Hall and was now standing before the Changling commander sitting on the ground. He added darkly. “Even if you die, you have to explain why the Changling Guard was here, and why you made trouble for this caravan!”

The Changling Guard commander wore a bitter smile and forced out softly. “We came here when we found that someone was secretly selling Chu-made Gold Toads. Those are burial items that were suspected to have been stolen long ago from the previous emperor’s tomb. We followed the clues and found that suspects were within this carriage train. Who would have expected to pull out a great rebel like Bai Shanshui?”

Mo Qinggong’s expression was as black as the underside of a pot. He could not speak at all.

How could Cloud Water Palace’s people be connected to the tomb robbers of a decade ago, but the clues led here? He was almost instinctively sure there was something fishy …

Without the Tiger-Wolf soldiers sacrificing their lives to block, the carriage moved faster, and more water surged towards the carriage.When it passed through the streets of Changling, the entire carriage was wrapped in a white cloud and dew. Coupled with the air-current, this did not seem like a carriage from afar, but a flying chariot drifting along the clouds.

Taking the shortest route from the Jiujiang Commandery Meeting Hall to the shore of the Wei River, the two horses, at last, saw the roiling expanse of the river and instinctively wanted to stop. But the middle-aged driver clapped his hands. The two horses cried sorrowfully but they did not stop and sprinted even faster.

The carriage leapt up and smashed into the river, making astounding waves. The strong carriage cabin could not withstand such a blow and split into pieces. The carriage driver stood on a piece of the cabin while the white figure easily stood atop the water.

At this moment, he had finally revealed his appearance. He had strong brows, handsome features, and white skin. He looked like a handsome young master from a rich family. Time had not left any marks on his face. He appeared to be in his twenties. People could not connect him to the swordsman Bai Shanshui who had resided by a desolate pond to practice the sword, and lived in the mountains for a decade to avoid the pursuit of the Qin Dynasty cultivators after the Wei Dynasty was annihilated.

Even more shocking was a whirlpool several meters wide that appeared under his feet. A white figure swam out of the deep water. It seemed like a white carp, many meters long, and supported Bai Shanshui and Fan Zhuo on its back.

At this time,the sound of tempestuous waves came from the distant port.

A colossal armored ship was moving quickly from the port entrance.

This armored ship was riddled with scars and dyed in motley colors. It made people feel that this was a giant coral that came out of the deep ocean. But this seemingly old and armored ship emanated a bloody energy as though it would dye the vast river red.

At the head of the armored ship was a turtle-dragon. The two red eyes of the turtle-dragon shone with intimidating light. On top of its head stood a woman dressed in white, her robes flying in the wind like a goddess!

Bai Shanshui did not panic. The white carp swam a half-circle and created a bow shaped white wave.

With a small smile, he looked into the distance, towards the celestial beauty “Bureau Chief Ye is as beautiful as they say. I greatly anticipate what it would be like when our Cloud Water Palace’s Cloud Water Art and Bureau Chief Ye’s One Sky Water meet each other. Pity, you came slightly late.”

Standing on top of the turtle-dragon was of course Ye Celeng with a calm demeanor calm. She said, “You can leave but you need to come back. I will see Mister in the future.”

Bai Shanshui’s smile faded. “I see that Bureau Chief Ye is not happy living in Changling. How about leaving Changling and roaming the rivers and lakes with me, isn’t that good?” he asked, solemnly.

“The scene is beautiful, but you do not even dare to let me near you, much less travel together?” Ye Celeng said with slight disdain. “If you really can let go, and spend your emotions on the mountains and waters, you will not come to Changling, much less sing your resolve and have your sword energy pierce the sky.”

“You are correct, I cannot let go of the old soul of my country. But I did not finish speaking just now.” Bai Shanshui said, with a smile. “It is enjoyable to sing and travel, but for cultivators like us, isn’t fighting the heavens and those people who possess millions of troops even more enjoyable? You also once learned the sword from that person. Even if you only want peace, will you find peace in Changling?”

Ye Celeng raised her head. The clear sky above her immediately filled with black clouds.

“I naturally have my reasons to be in Changling, you just cannot understand.” She said softly, her face expressionless, not caring if Bai Shanshui could hear clearly. “Different ideals, so we have different paths. Since that is the case, farewell.” Bai Shanshui smiled and nodded.

The white carp beneath whipped its tail and moved across the surface of the river in a flash. It swam away at astounding speed. In a span of a few dozen breaths, Bai Shanshui and Fan Zhuo’s figures had turned to two small dots on the river. Even the fastest ship could not catch up to them.

Only the ethereal song of rebellion spread through the river winds.

Outside the Fish Market, by the shores of the Wei River.

Hearing the faint song, she spoke in an unusually calm voice. “Uncle Sun, do you see, the greatest problem of Changling is that people’s hearts are not united. When something happens, it will be because of someone’s mistakes, and then people will need to take blame and die for the face and advancement of Changling and the Qin Dynasty. We finally had someone that could control matters and they were killed by one of their own.”

The hunchback did not lift his head. He didn’t speak, and only made a “hehe” sound. It sounded like laughter but also sobbing.

Translator Ramblings: The bows on the turrets are likely to be mounted “bed” crossbows which are more similar to ballistas than normal crossbows. 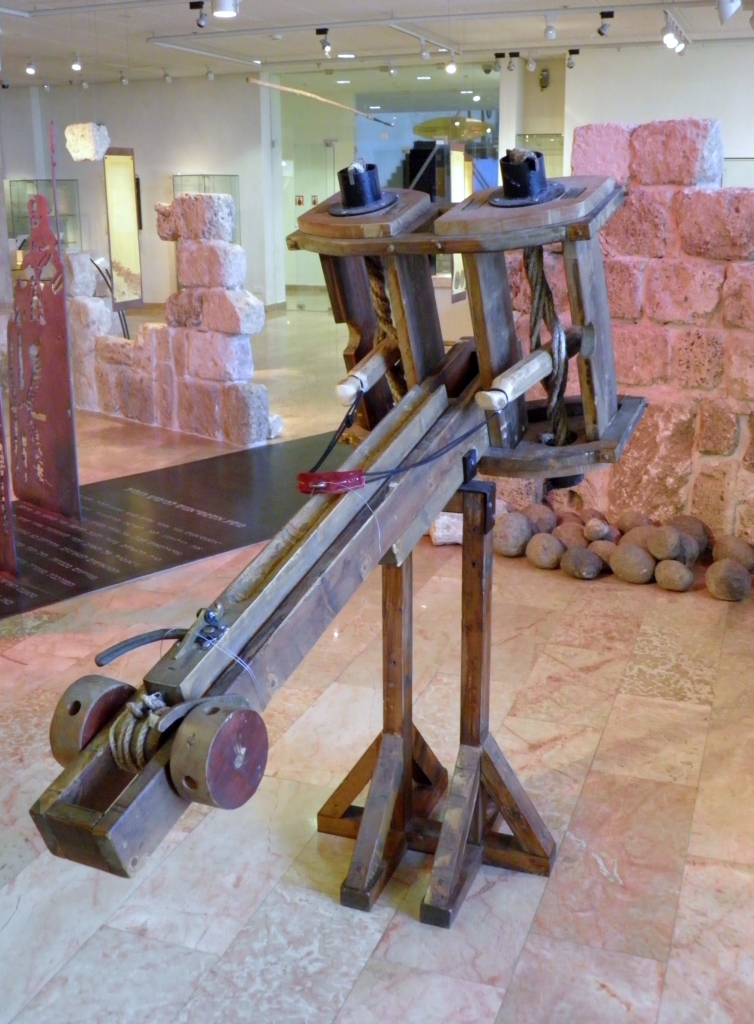 The Qin Emperor was famous for his standardization and there was also the “Straight Road” that was built north to south as a superhighway.

Since larkspur and I spend so much time debating how the carriage got to the Wei River, it’s like this shortest distance from a point to the curve problem. The river’s the curve, and the point is the meeting hall.