Di Qingmei was no ordinary being. However, Xue Wangxu’s words gave him, who had been stuck at the doorway to realm seven for several years, a profound understanding.

His hands continued to quiver. In a quiet and disbelieving voice, he asked, “Why do you say such things to me?”

“Do not forget that White Goat Cave and Green Vine Sword School first belong to the Qin Dynasty. No matter our statuses, we are first people of Qin.” Xue Wangxu glanced at Di Qingmei and continued calmly. “His Majesty and the empress can tolerate me and Senior Sect Brother because they know we consider ourselves people of Qin first. When necessary, our swords will target the enemies of the Qin Dynasty. As to cultivation, when you reach my age, you will not fear other people catching up or surpassing you. My enemies are only myself and my age.”

He felt very small underneath his clothes. He could feel that the very distant mountains that Xue Wangxu was looking at and the sky above him, had merged into one, and was exceptionally large.

“Xue Wangxu, I am not as good as you,” he whispered, when his hands had stopped trembling.

“That may not be.” Xue Wangxu said, calmly. “My road is almost at an end, but yours has still a long way. Only you can determine what future.”

In the sword trial valley, after his defeat, Shi Xia took off the token and was about to hand to Ding Ning.

“So appetizing.” Ding Ning sniffed and said, “Do you smell it?”

Shi Xia stilled. He inhaled hard and intently focused for a while before he seemed to smell a faint scent of roasting meat. This was definitely not the skylark he had half-burnt previously, but a kind of meat with enough fat to dissipate the aroma when it was cooked.

One look at Ding Ning and Shi Xia couldn’t resist a well-intentioned caveat. “That could be a trap. You have already won against me today. You have only to reach the designated area to pass.”

Ding Ning laughed and said, “While I ate a few wild oranges, my empty stomach is incessantly acidic after eating such a sour thing. I am in discomfort. I must have some substantial food in my stomach to have enough energy.”

From the start, Shi Xia had categorized Ding Ning and himself as the weaklings. Little had he expected that Ding Ning would actively seek opponents. Anticipating Ding Ning to face another hard battle soon, and the refined sword moves that Ding Ning had only just evinced, his gaze suddenly heated up. Shi Xia blurted out, “Junior Sect Brother Ding Ning, may I go with you to watch?”

Ding Ning glanced at him and with a smile said, “I have no objections. I just do not know if the teachers of Green Vine Sword School would have any opinions. Trial rules forbid two people from travelling together.”

Shi Xia handed the token to Ding Ning as though he was awakened. He said, “If I admit defeat, then I will not be travelling with you. If a teacher wants to order me immediately out of the valley, I will ask him for more time. It will take a lot of time to return to the viewing platform now, and I may miss many things.”

Ding Ning smiled slightly. He did not say anymore and started towards the source of the aroma.

Shi Xia feared that people would say he was influencing the trial if he was too close to Ding Ning, so he followed Ding Ning from a distance. After passing around many vine walls, he was even more shocked, for his olfactory had finally caught a clear aroma wafting at this time.

Apparently, Ding Ning’s sense of smell was several times more sensitive than his.

Some bright orange colors appeared in front of Ding Ning. This was no wild and shriveled oranges past their prime. This was a wild persimmon tree

Looking at the ripe persimmons on the trees with white frost still on the surface, Ding Ning laughed contentedly. He nodded in greeting at the person below the tree and said, “In Changling, they say that persimmons with frost are as sweet as honey. I have always preferred persimmons like this. Senior Sect Brother Ye Ming has found a good place.”

At this moment, he sat on a rock under the wild persimmon tree to roast a boar leg. Beside the fire was a black boar with a severed leg.

This was a leisurely scene of ample food and clothing.

At Ding Ning’s words, worry surfaced on Ye Ming’s face. He seemed to be ill at ease for words.

Walking closer and seeing this mien, Ding Ning laughed. “Were you also forced by Senior Sect Brother Su Qin to deliberately wait here for me?”

Ye Ming was shocked. “Junior Sect Brother Ding Ning, how did you know?”

Ding Ning pointed at the thin mist behind him. “Because there is a precedent.”

Ye Ming could faintly discern a Green Vine Sword School disciple in the mist and he stilled.

“He is Shi Xia, a disciple of Green Vine Sword School. I won against him and he followed me to watch.” Ding Ning said bluntly. Then he rubbed his stomach. He eyed the golden roasted boar leg in Ye Ming’s hand. “My stomach is in discomfort, will Senior Sect Brother Ye Ming invite me to eat?” he said, seriously.

The shock in Ye Ming’s eyes intensified. But he hesitated.

“Did Senior Sect Brother Su Qin hunt this? That is alright. No matter if I win or you win, would he, in the subsequent trial, have mercy for one who wins?” Ding Ning curled his lips and spoke as though he could read Ye Ming’s thoughts. “So what if I eat his boar leg?”

“The boar meat of the mountain is really fragrant. Senior Sect Brother is very good at roasting meat. PIty that there is no salt and only persimmons to season this.”

“One is hot and oily, the other is cold and sweet. Careful, lest you suffer from indigestion from eating the two together.”

“No matter, He Zhaoxi ate a lot of raw meat and didn’t have diarrhea. His precedent tells me that intense exercise will increase the energies of the intestines. I have to fight Senior Sect Brother later, so it is perfect.”

“Yes, he lost to me. Didn’t Senior Sect Brother Su Qin tell you?”

Ye Ming’s brows furrowed slowly. He looked Ding Ning who had sliced a significant portion of the boar leg. He grew stern. He couldn’t help but say, “Junior Sect Brother Ding Ning, I know that you have extraordinary talent, but one must be honest. You are so young, why weave a tale to scare me? Do you think this will scare me?”

Ding Ning looked up. His gaze shifted from the half-eaten persimmon in his hand to the stern faced Ye Ming. “Senior Sect Brother Ye Ming, I am honest.” he said, helplessly.

“You still do not repent.” Ye Ming’s face took a turn for the worse. He put down the boar bone in his hand and slowly stood up. “If so, then let me see how strong Junior Sect Brother’s sword is.”

Ding Ning looked seriously at him and said, “I am not full yet.”

Ye Ming took a deep breath and said, “It is not good to overeat. Also, from what you said, someone is waiting to see your fight.”

“I do not know where you picked up a Green Vine Sword School uniform, but you think you can scare me like this?” Unexpected to Ding Ning, Ye Ming grew angier upon hearing this. He shouted, “Do you think that I am able to believe you defeated He Zhaoxi, and pulled his robe off him?”

That scene was so beautiful, Ding Ning didn’t dare imagine it.

So he unwillingly stood up and walked towards an empty place on the side. He helplessly pulled out his Last Flower remnant sword and said, “Senior Sect Brother Ye Ming, please.”

Ye Ming pulled out the long sword he carried on his back with a dark expression. He knew that Ding Ning cultivated the Wildfire Sword that was primarily focused on defense. He jumped, his near his middle to stab upwards at Ding Ning’s chest.

This move was unusually simple, and his sword was also an ordinary Qin black metal straight sword. There was just a seal script that stretched along the blade on the sword ridge. This seal script could allow the physical energies that were channeled in to charge out through the sword tip. It was not as miraculous as other swords.

Several feet away from Ding Ning’s chest, a white sword energy charged out of the sword tip with a hiss. Like a white goat horn that suddenly stretched out, it curved as it moved upwards and headed for Ding Ning’s chin.

This move was the famed ‘White Goat Hanging Horn’.

Ding Ning took a moment. He deliberated on the most definitive move to beat Ye Ming at the quickest.

So in this moment, he took a step backwards. Then he poured all his strength and physical energies into the Last Flower remnant sword in his hand. Hissing sounds emanated from this inky green blade covered in fine cracks as small white flowers completely wrapped the blade.

Then, he swung his sword to meet the White Goat Horn.

Watching from afar, Shi Xia’s breathing stilled. He felt that something amiss, but had no time to consider before Ding Ning’s sword and the rising White Goat Horn collided.

Ding Ning clearly could not endure and took a step back.

Ye Ming’s long sword froze in the air. He was slightly dazed. But when he felt the presence of the white flowers that had sprayed out and the power rippling on his long sword, he finally understood.

A few seconds ago, he said that Ding Ning was using He Zhaoxi to scare him and he could not be scared. But in this moment, he seemed to see something terrifying. He shouted in bewilderment. “What is going on?! Energy Refinement second-class cultivation! Why do you have cultivation near Energy Refinement first class?!”

Translator Ramblings: Have a picture of a goat. 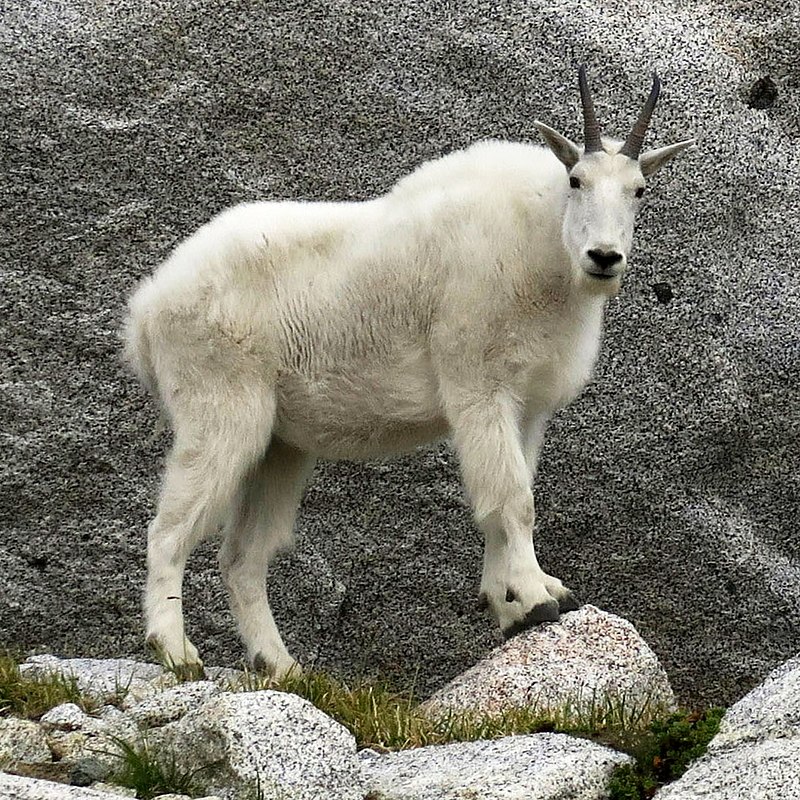