In the morning, Ye Celeng turned around from where she had stood on the bridge like a puppet. Her gaze fell towards an ordinary gully next to Bureau Chief Chen.

The water flowing in the gully of the ordinary street was the same as Bureau Chief Chen’s robe, deep red and giving off the smell of blood.

“You stand here tonight and look at me. You feared the empress would do something even madder and use the opportunity to deal with me.”

Ye Celeng pressed her lips slightly. She did not smile but showed two pretty dimples. “See, after a night, the water in the gully is even stained by blood. When one stays in Changling, one thinks of matters of life and death, and has no other idle emotions.”

Bureau Chief Chen gave a rare smile, slightly sunny like the sun. “If you do not like this place, you can leave.”

Ye Celeng once again gave off the indisputable presence she once showed against Zhao Zhan. She said coolly, “Mo Shoucheng chose to become the empress’ stepping stone to her great ambitions so she can do something no one else has done. I believe in that person’s judgement. In the future, the Qin Dynasty will consume the Chu, Yan and Qi dynasties. Where is Changling not present, where can I go?”

“Do not say the overseas mountains.” After a pause, Ye Celeng looked at Bureau Chief Chen who moved to speak and said, “Official Xu took almost all the Qin warships overseas, and even the island countries are now united.”

Bureau Chief Chen was not an ordinary Changling citizen. He knew what Ye Celeng said was not impossible. As such he was unable to argue.

“If one really wants to leave Changling, they need to resolve all grievances in Changling. Otherwise, Changling is everywhere.”

Ye Celeng smiled and turned back to the bridge. She walked towards the streets on the other side and left Bureau Chief Chen’s sight.

Amidst the sunlight, Ding Ning slowly walked out of the room into the courtyard. He was not pretending. Even with the treatment of many famous doctors of Changling, even with the Nine Death Silkworm and the Heaven Replenishing Divine Art, after killing Palace Attendant Rong and then Liang Lian, he had surpassed his body’s limits. If not for the Heaven Replenishing Divine Art, many of his hidden injuries would not heal in his body and would grow more severe.

When he walked out from the eaves to the sunlight, Jing Liuli appeared at the courtyard gates. She walked slowly, and her expression was extremely tired. Even her legs were minutely trembling.

Ye Zhengnan, standing at the clinic’s doors, looked in shock and confusion at Jing Liuli. He could feel that Jing Liuli’s presence was extremely calm and the trembling of her legs was a natural response she could not control.

“It appears you saw many battles this night.”

Before Ye Zhengnan could react, Ding Ning looked at Jing Liuli and spoke.

“I only missed two of Mo Shoucheng’s blows,” Jing Liuli nodded and said.

Ye Zhengnan was shocked and then suddenly realized. Last night, Jing Liuli had chased Mo Shoucheng’s sword and seen many of his blows, and many battles between grandmasters.

“I saw one of An Baoshi’s attacks. He is stronger than I am now,” Jing Liuli said seriously after a pause and looked at Ding Ning.

“You are both geniuses. It depends on who learns faster. The chaser always will be faster. You will quickly catch up to him,” Ding Ning looked at her and said seriously. “Many people would never have seen many battles between grandmasters as much as you in their lifetimes. When you return to Min Mountain Sword Sect, you will have great achievements.”

“You should be returning immediately to Min Mountain Sword Sect.” Ding Ning looked at her and nodded.

Jing Liuli could not understand and said, “I still have to stay here and study.”

Ding Ning shook his head and said, “Your master will have you return.”

In the days Jing Liuli had studied from Ding Ning, she had undoubtedly improved. She also heard some meaning that Ye Zhengnan could not understand. Jing Liuli started to understand and her expression grew ugly. “What about you?”

“The Yuezhi has already submitted, the Wu remain. If the Donghu is conquered, we will have no more troubles when fighting the Yan and Qi.”

Of course Ding Ning had not heard the conversation between the empress and Yuanwu but at this moment, he spoke the exact same words.

Then he looked at Jing Liuli and added. “As to the Chu, it seems that she has never been worried.”

This was concerning the state of the world. Jing Liuli was still limited to Changling and could not understand. So she bowed like an attendant and said, “Please teach me.”

Ding Ning gazed towards the northwest and said with slight disdain, “If I am correct, the Qin are going to start a war with the Wuzhi. The cultivators from Changling’s cultivation places will be driven to the border to conquer the Wuzhi.”

Jing Liuli frowned. She was not angry and even admired the empress’ decisiveness inside.

“You mean that Min Mountain Sword Sect will also accept the empress’ orders, accept the conscription order like these cultivation places and then you will go to the Wuzhi border?” she frowned and asked Ding Ning.

Ding Ning shook his head and said, “Not just so. I will be sent to the Donghu border.”

“Donghu and Wuzhi are closely connected. Also the people of Wuzhi and Donghu are all strong. If Wuzhi is attacked, Donghu would not just stand by. Even if they do not send all their armies, they will send some armies in secret to help. The Qin army has to be on guard,”

Ding Ning looked at her and said, “Donghu, Chu and Qi border each other. They are far from Wuzhi. A place like that has too many variables and will be more dangerous. Even Min Mountain Sword Sect cultivators likely have no control over a place like that.”

“Do not think to obstruct.” Ding Ning smiled and said, “I say all this to you because I do not want you to act. Since I have expected all this, I naturally will be fine.”

Jing Liuli looked down and thought for a moment. Then she looked up strangely at Ding Ning. “So you actually hope to leave Changling?”

Ding Ning smiled and said, “Achieve great merit is something most cultivators pursue. The more dangerous a place is, the easier it is to get military merit.”

“But you are not most cultivators. Your choice, and your exhaustive strategies make me feel something is not right.” Jing Liuli bowed deeply to Ding Ning after saying this. “Regardless of whether your words today come true, or if I am returning to Min Mountain Sword Sect immediately, thank you for your teachings these past few days. But in the future, I hope you do not become my enemy.”

“Whether or not we become enemies may not be determined by our will,” Ding Ning said coolly and then looked up towards the path outside.

Some dust was rising on the distant path. A body, mountainous and with a terrifying presence, appeared in their sights.

This was Hengshan Marquis Xu, one of the thirteen marquises of Qin.

Appearing even faster than him was a handsome man.

“I am returning to Min Mountain Sword Sect?” When Tantai Guanjian appeared at the courtyard gates, Jing Liuli asked directly.

“Ding Ning is staying and going to the border?” Jing Liuli looked at him and asked.

Tantai Guanjian did not immediately answer or deny. After a pause he said, “This depends on the empress’ decree.”

Jing Liuli did not look at his expression and turned to Ding Ning, saying, “You guessed right.”

Ding Ning glanced at Tantai Guanjian and said, “I will take some people along, and I want a day or two to prepare.”

Tantai Guanjian did not hesitate this time and said apologetically in a soft voice, “This is no problem.” 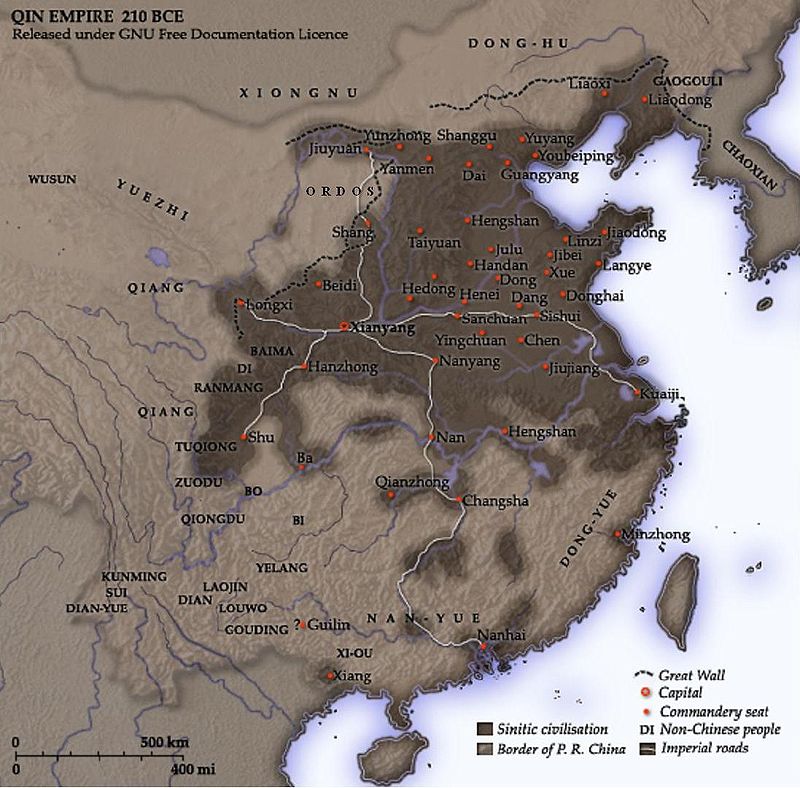 Here’s a general map of Yuezhi and Donghu. You can see the Wusun to the left of the Yuezhi, which is what I think the author is calling Wuzhi. History took a turn here and the Qin have already defeated the Yuezhi. Xianyang (Changling) is in the middle there, and you can see the empress’ birthplace, Jiaodong, near the ocean to the east.