During daytime, this place was calm, but once night arrived, many strange vibrations occurred in the surroundings.

These vibrations were minute but numerous. Lin found a better term to describe these minuscule vibrations, “sound.”

Such a clever term. Regardless of whether the vibration was fast and slow in frequency, their amplitude was always small. The tentacles on Leviathan’s back contained many sensory cells that could sense vibrations at different frequencies. Right now, Lin was receiving a vibration at a high frequency but a small amplitude.

This was “sound.” Only organisms should be able to do this.

These were probably small organisms around several centimeters large. They must have some reason for making so many sounds.

Lin did not ignite a lantern in the darkness, which may lure in some unfriendly things.

Lin took the strategy of inaction. Leviathan and the transporter leaned next to a spiky pillar and waited silently for the darkness to pass. The temperature of night was low, and the cold wind had blown away all the moisture out of their shells. But their shells were thick enough so no liquid leaked out.

In the past hundred million years, Lin knew how to make impervious shells but it still did not know all the unique traits of land.

The stars were not as bright as before. Only some scattered light touched the ground due to the obstacle of the spiked pillars. The light could not illuminate the shadowed places that occasionally gave off quiet sounds.

Lin didn’t know what organisms were hiding in there.

These sounds were sometimes loud and quiet, sometimes close or far. These organisms might be running around. Lin focused on the scattered light in the darkness and attempted to see the sprinting figures through the starlight.

After changing the structure of its eyeballs, Lin created a new kind of eye that it called the “capture eye.” This eye could detect fast movements.

A black shadow flashed under the scattered starlight. While it was extremely fast, the eyeball still caught its appearance.

That seemed to be a very small arthopod. Its body was flat and about ten centimeters in length. It had six long legs but due to the lack of light, Lin did not see clearly.

These organisms were running in the surroundings. They occasionally gave quiet sounds as though … they were communicating. Their frequency increased as though they were gathering nearby in large numbers.

Lin did not act. It did not know what these organisms wanted to do. But based on their body shape, they should not be able to do anything ….

However, Lin did not feel well being surrounded by so many unfamiliar organisms in a dark environment like this.

When the light touched it, the arthropod jumped off Leviathan’s body and quickly fled.

There was no mark where Leviathan’s armor had been chewed. Lin was puzzled. Why did such a small organism dare to come forward and attack an organism so much bigger than it?

Lin’s question was not answered. The arthropods in the surroundings continued to give “crack crack” sounds. They did not charged forward together and only circled around in the darkness. Lin swept with the light of the lantern and was unable to catch their figures.

They seemed to be deliberately avoiding light?

Lin had a bad feeling. It put away the lantern tentacle and decided to see the situation.

The moment the lantern light disappeared, Lin immediately sensed countless sounds. That was the sound of their legs touching the ground. The sounds were minute and hard to sense, but because they were so numerous, they were clear.

Countless arthropods charged. Leviathan could feel they were all climbing onto the Leviathan and transporters without even having to look. They used their mandibles to grind against the armor.

Lin’s armor was lighter than they had been in the ocean in order to adjust to land, but the armor was not thin. Also, the thinnest places were parts such as the water spout, and the openings where the tentacles retracted back into the shell. If this continued, disregarding whether Leviathan and the transporters would be damaged, the arthropods would break their teeth first.

The arthropods also seemed to understand but they were still running around Leviathan and the transporters. Suddenly, they reached some holes on the Leviathan’s body that had not closed.

Those were small pores used for absorbing oxygen. They were so small that even the arthropods could not burrow in.

Unexpectedly, a wave of pain came from the gas pores. This was the feeling of the inner cells being dissolved.

They knew to use dissolving fluid? Lin squeezed the muscle cells in the inner wall of the breathing hole and sprayed out a stronger wave of dissolving fluid. It sprayed on the arthropods in the surroundings.

“Crack …” They gave a strange sound when they were injured but they still did not retreat from Leviathan’s body.

This really was troublesome.

Lin once again stretched out the lantern tentacle. The moment it appeared, the organisms surrounded the tentacle, but the moment the lantern light shone, these arthropods seemed to feel great pain. They screamed as they all fled.

Lin used the same method to drive away the arthropods on the transporter. However, while they fled, they still circled in the surroundings and were not willing to leave.

It seemed that Lin had to leave here. Otherwise, it didn’t know what these organisms would do.

The Leviathan led the transporter and started to run quickly through the black spiked forest. The arthropods closely followed, giving off strange sounds. But they seemed to fear Leviathan’s lantern and did not dare to come forward.

Lin did not know where to go within the spiked forest. It only wanted to see if it could leave the arthropod swarm behind.

Lin passed around countless spiked pillars before detected the sound quieting behind it.

Had they given up?

This figure was enormous. Leviathan came close and then Lin found this was something familiar.

More accurately, the remains of a shark. This shark was two meters in length and should have been thrown here by the tsunami. Much of its middle had been eaten, and the remaining organs were scattered around the ground. There were no signs the head and the tail had been fed on.

Lin wondered what kind of organism ate this corpse but did not finish. Also, no organisms were coming in to eat.

The shark corpse gave off the special rotting scent. This scene was disgusting to some organisms, but most organisms should think of it as a signal for food.

Lin had a bad feeling and immediately had Leviathan and the transporter leave and start to run quickly again. The moment Lin fled, it sensed a powerful vibration behind it.

An enormous thing was moving in Lin’s direction.

The Leviathan and transporter were very slow in reality because they had too much water inside. They were far slower than they were in the water. Lin did not know what structure would be faster on land.

Sensing the enormous organism giving chase, Lin suddenly realized that the shark corpse was a … trap?

But this was no longer important. Lin put away the lantern. While it was not fast, it still ran with all its strength.

The enormous organism that had used the shark as a trap only chased for a while before retreating. It did not appear it would keep on chasing.

Lin did not stop and continued to sprint.

The spiked pillar forest in the night was filled with all kinds of strange sounds and scents during nighttime. During the day, it was hard to see any organisms here but during night, this place seemed to come alive.

As Lin continued to sprint, the transporter’s appendages seemed unable to bear the burden. The cells in the inner muscles tore apart or just died due to the intense exercise.

Even Leviathan felt tired due to the unfamiliarity with the weight of land. But Lin still continued to run until it was sure that there were no dangerous sounds or scent nearby before stopping.

However, there was a scent that always roamed around Lin without dissipating.

That was … the scent of rotting corpses.

Translator Ramblings: I don’t know what the aquatic equivalent of ants would be, but colonies of insects working together underwater seems frightening.

Below we have sketches of Euthycarcinoidea which may be the first arthopods on land. 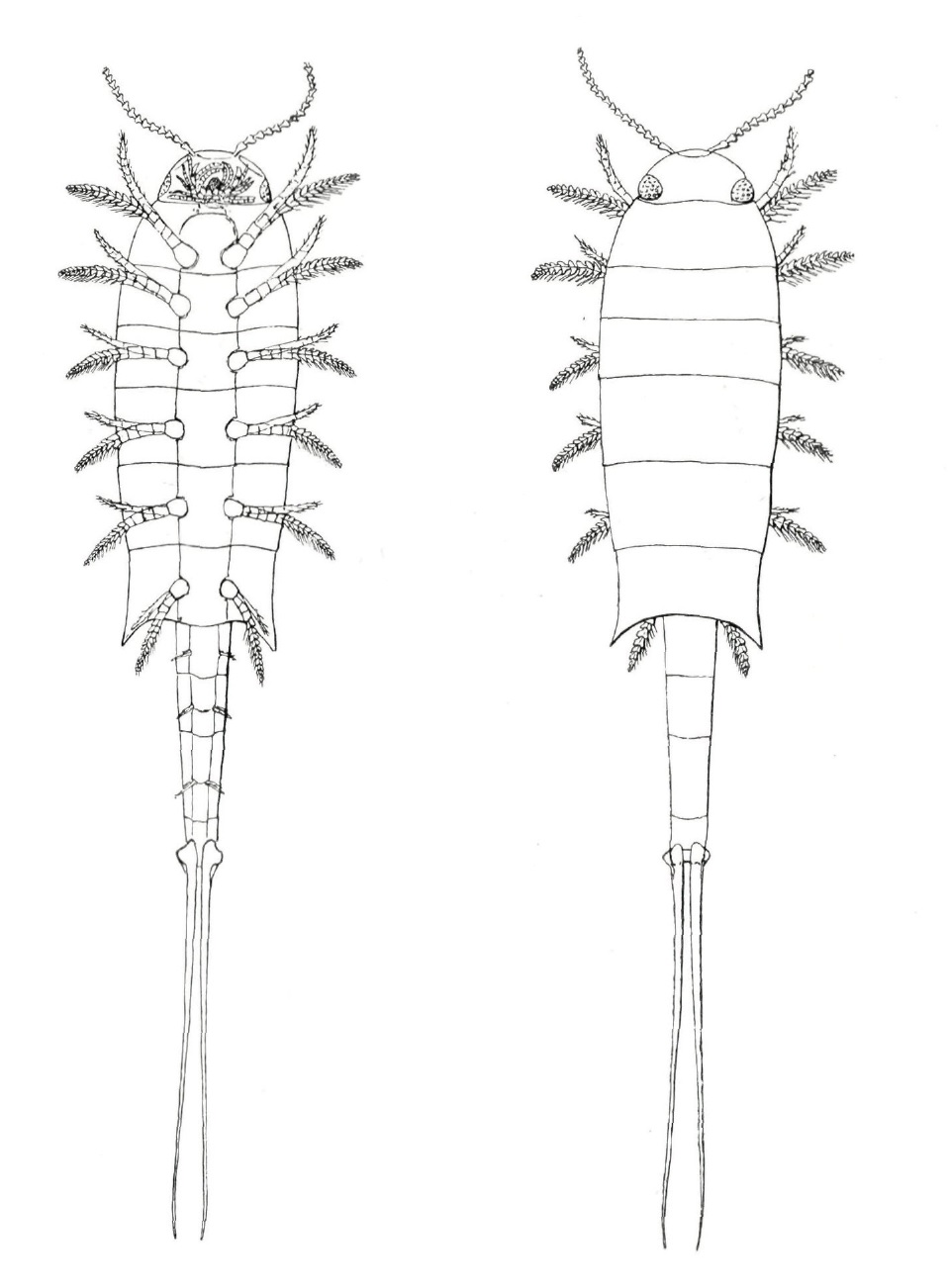